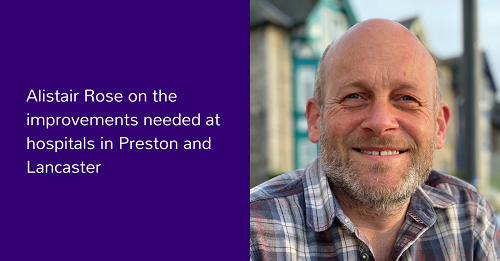 The condition of hospital facilities in both Preston and Lancaster is one of the main driving factors behind the Lancashire and South Cumbria New Hospitals Programme, which has indicated its preference for two new hospitals on new sites for both Royal Preston Hospital and Royal Lancaster Infirmary.

What is your role within the NHS and on the New Hospitals Programme?

I am the director of strategic estates, infrastructure and sustainability for NHS Lancashire and South Cumbria Integrated Care Board (opens in new window), and all three parts of this role set out what we are trying to achieve with the New Hospitals Programme. This includes the provision of efficient and effective building facilities that are delivered to net zero carbon standards. The sustainability part of my role is to help all of the NHS across Lancashire and South Cumbria to get to net zero carbon by 2040. There is a growing awareness across the NHS that sustainability will affect all of our roles and responsibilities as citizens to actively participate in reducing our negative impact on the planet.

The strategic estates and infrastructure part of my role does what it says on the tin. We have 17 hospitals across Lancashire and South Cumbria, and we have to think about the two we are looking to replace or rebuild / refurbish in the context of all of them. We have to do this both from the building fabric and how different services are located in proximity with each other, and also how we map our healthcare provision across the whole system – in primary care and community settings, the mental health trust and also the acute trusts.

What is the current condition of the Royal Preston Hospital and Royal Lancaster Infirmary sites and what challenges do they present?

Much of the NHS healthcare estate across the country is in a poor condition. That gets tracked every year by a series of conditions surveys, in which poor and deteriorating condition are loosely known as ‘backlog’. The planned maintenance activity to address backlog gets categorised depending on the severity and impact on NHS services, with ‘high’ being the most significant. Backlog is also assessed in terms of the cost to remedy and this forms part of the hospital’s overall assessment of its estate and its condition.

The condition of NHS and hospital buildings and their current levels of backlog are impacted by a range of different issues, including the initial design and specification, how well they were constructed in the first place, and the amount of money that has been spent over decades on maintaining them. That is where we have got a particular issue in Lancashire and South Cumbria. A number of the hospital buildings are in poor condition, which can impact on the availability and suitability of space for clinical and operational activity.

It is really not about bad decisions made in the past. When there are specific or fixed levels of funding available in any one year and some work can be put off until the next year, often the focus is on using those limited funds for looking after patients rather than replacing a roof that is deteriorating. If you defer some maintenance in one year, this can affect the maintenance regime in subsequent years and there is the potential to start stacking up problems into the future. That is where the term backlog occurs, because you start accumulating more and more things that need to be done to fix the buildings or bring them up to a modern standard.

There is a growing awareness of the condition and suitability of the buildings at both Royal Preston Hospital and Royal Lancaster Infirmary, which is why they are both within the scope of the national New Hospital Programme.

Parts of the Royal Lancaster Infirmary are from the Victorian era, with some of the original buildings opening in 1896. Some of the very old parts and different buildings built in different generations over the following 100 years are loosely knitted together on a very steep, sloping site. The sloping site to some extent hinders the provision of healthcare as there are difficulties transferring some patients between different parts of the site without using ambulances because it is simply too steep to push a trolley or bed, and for some patients to walk. Royal Preston Hospital on the other hand is a large, predominantly 1970s-built series of high and low-rise interconnected buildings on a sprawling site. The building design and the materials used are typical of standards 50 years ago, but increasingly these buildings are difficult to maintain year on year to keep them in a suitable condition. It is approaching the point where the cost of maintaining and updating these buildings may outstrip the cost of a new modern hospital, especially when considering the inefficiency of the design and layout of the existing site. Those are some of the problems we have for both the hospitals. this is absolutely not about new buildings for the sake of having new buildings, but about having the right accommodation to provide suitable and effective healthcare for our patients and staff who deliver this.

What are the pros and cons of rebuilding on an existing site versus a new site?

I have spent 30 years in the NHS doing this sort of job and I have seen the impact and improvements you can have by putting new buildings on an existing hospital site. Partial rebuilds would be a significant improvement on what is there now. There are benefits in having a lot of the infrastructure in place already, such as bus routes, and so on. Also, patients know where the existing site is and how to get there.

The downside of major developments on an existing hospital site can be the impact on the provision of healthcare on the site at the same time. For example, you have a busy hospital site which already has a shortage of parking spaces and congested roads nearby and then you would need to upend it and carve out a chunk of the site to redevelop it for a period of several years, carrying out major works, including changing drains, water supply pipes and power supply, which is also serving the existing hospital and health services.

Patients would get all the disturbance and disruption of all the construction over a period of years. Knitting things together into an existing hospital is complicated to plan and manage alongside maintaining services for patients in the same location.

In addition, partial rebuilds would not enable us to tackle all the existing backlog issues on the sites, such as inefficient layouts and dated design, or our net zero carbon ambitions.

The benefit of having a new site is far more straightforward. You can plan the hospital at an optimal level, or you can design it to be an optimally efficient hospital with the latest thinking and latest designs, rather than be compromised by 1970s designs or something going back to Victorian times. You can design the very latest hospital for the very latest efficient healthcare, latest therapies and to the latest standards. You can build it as fast as you are able because the construction would not get in the way of the delivery of healthcare. You can finish it as soon as you are able and then you incrementally move in, so it is quicker and more efficient with the money you are spending. One of the most important considerations when planning a new hospital is to find a site that is best located for the population and patients it provides care for.

We will be dependent on the availability of public finance to deliver our ambitions for our health services. We need to do the very best for the people in and around Lancashire and South Cumbria by making a good case within the national New Hospital Programme and Government for the resources that we need.

Latest news (26.09.22): recommendations for new hospitals in new locations for both Royal Lancaster Infirmary and Royal Preston Hospital
Sign up to news by email
Page last updated: 19:52, 07/12/2022
Return to top of page