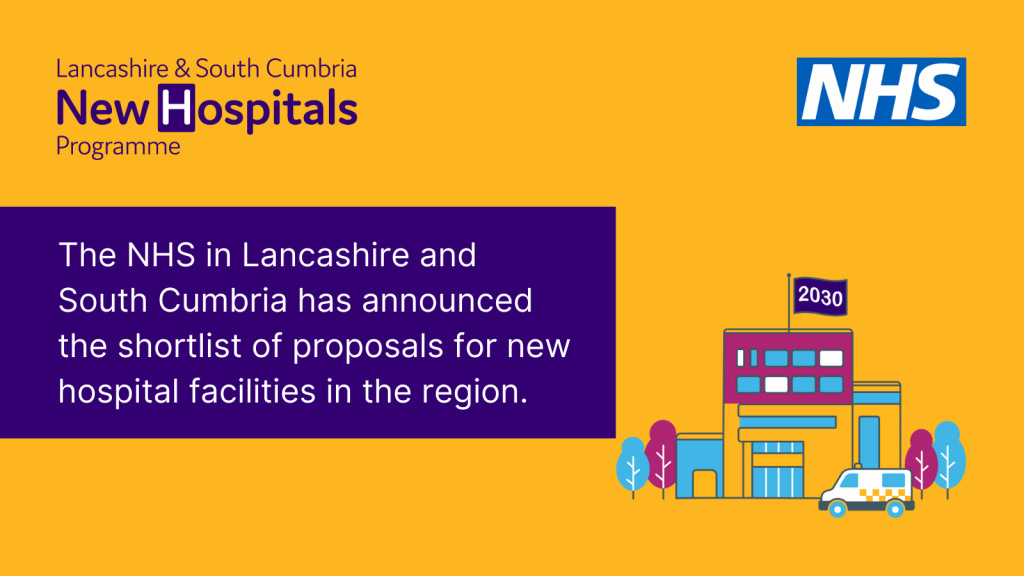 of proposals for new hospital facilities in the region, marking an important milestone in transforming care and reducing health inequalities for local people.

The shortlist of proposals is a significant development in the Lancashire and South Cumbria New Hospitals Programme, which plans to develop new, cutting-edge facilities, offering the absolute best in modern healthcare and addressing significant problems with the ageing Royal Preston Hospital and Royal Lancaster Infirmary buildings.

The shortlisted proposals are:

These proposals also include investment in Furness General Hospital, required due to its geographically remote location, its proximity to some of the UK’s major strategic national assets, and its need to meet NHS environmental goals.

In line with NHS guidelines, the shortlisted proposals will be benchmarked against options for no change to, and / or limited investment in, Royal Lancaster Infirmary and Royal Preston Hospital to address the list of tasks that need to be performed to repair or maintain the buildings and keep them in a suitable working condition.

“Lancashire and South Cumbria’s New Hospitals Programme is set to deliver major benefits to patients in our region. It will enable our local NHS to deliver flexible, state-of-the-art buildings and technology, designed to improve local people’s life expectancy and health, and increase staff morale, retention and recruitment.”

“This is an incredibly exciting development for healthcare in our region as we take the next step in our journey towards new hospitals. This funding will have a wider positive impact on our local region, attracting further investment, acting as a catalyst to deliver wider socio-economic benefits and playing a key part in revitalising the regional economy, as well as introducing measures to cut carbon emissions and protect the environment.”

“This is a fantastic opportunity to build the hospital facilities that our patients, staff, local communities and future generations need and deserve. To help shape these plans, we must take on board the views of those people whose lives may be most impacted by any change, including our NHS staff, patients and local people.

“The people we’ve heard from have told us they agree that Lancashire and South Cumbria needs funding for new hospital facilities. However, we’ve also heard clearly and consistently that travel and accessibility are a huge priority. This was an important factor in helping us decide which proposals to take forward and which to discount from the shortlist.

“We want to thank everyone who has taken the time to share their views. We are now asking local people to share their opinions on the proposals we’ve shortlisted, and may move to public consultation if the option or options we take forward could change services or patient access significantly. We’ll continue to keep everyone posted on our plans.”

Following detailed analysis of each shortlisted option’s feasibility, the programme will follow a clear process over the coming months, with scrutiny and approvals needed from decision makers within the NHS, the government and local authorities, and ongoing patient and public involvement, before the preferred option is agreed. The programme aims to complete the building of new hospital facilities by 2030.

About the New Hospitals Programme

The Lancashire and South Cumbria New Hospitals Programme is part of the Government’s commitment to build 40 new hospitals by 2030. Together with eight existing schemes, this will mean 48 hospitals built in England over the next decade, the biggest hospital building programme in a generation. Find out more on the ‘Our NHS buildings’ website (opens in new window).